Recently, I had a memory leak in production. I saw that a specific service’s memory steadily rises when under load, until the process hits an out of memory exception. After a thorough investigation, I found out the source of the memory leak as well as the reason to why it happened in the first place. To diagnose the problem, I used Golang’s profiling tool called pprof. In this post, I will explain what is pprof and show how I diagnosed the memory leak.

Our clients use our system through a proxy service, to which, we provide access to. The said memory leak happened in the proxy service.

Some of the images here will be cropped and missing some information due to security reasons.

After getting complaints from clients about hiccups and disconnects, I started digging for the problem.
First thing I did, was go into the company’s Grafana and check the memory and cpu of the proxy service.
I looked at the service and compared metrics from 3 different scenarios:

All the overlapping lines below are idle instances of the service, only the green line gets traffic.

There are a couple of obervations from the image above

Before jumping on a profiling adventure (some may call it a nightmare), I made a small checklist of things I wanted to exclude:

After completing my checklist and seeing the leak was still present and that it was reproducible, I started profiling the service with pprof.

From the pproff github page

pprof is a tool for visualization and analysis of profiling data.
pprof reads a collection of profiling samples in profile.proto format and generates reports to visualize and help analyze the data. It can generate both text and graphical reports (through the use of the dot visualization package).

There are several profiles you can collect

For memory leaks, we want to start with the heap profile.

To inspect a profile we run go tool pprof heap.out.

There are two types of allocations the profile will collect

Entering top will display the top 10 results that make up the most memory consumers. We can write any number after top to see the top results.
We have two important fields to look out for

pprof also has a web interface to visually examine the profile.
To run pprof with the web ui run go tool pprof -http=':8081' heap.out, notice the http flag.
The biggest memory consumers in the profile collected will be shown as red, which are your points of reference.
We can see in the image below, that there are two red paths, one for the http server and one for runtime.malg 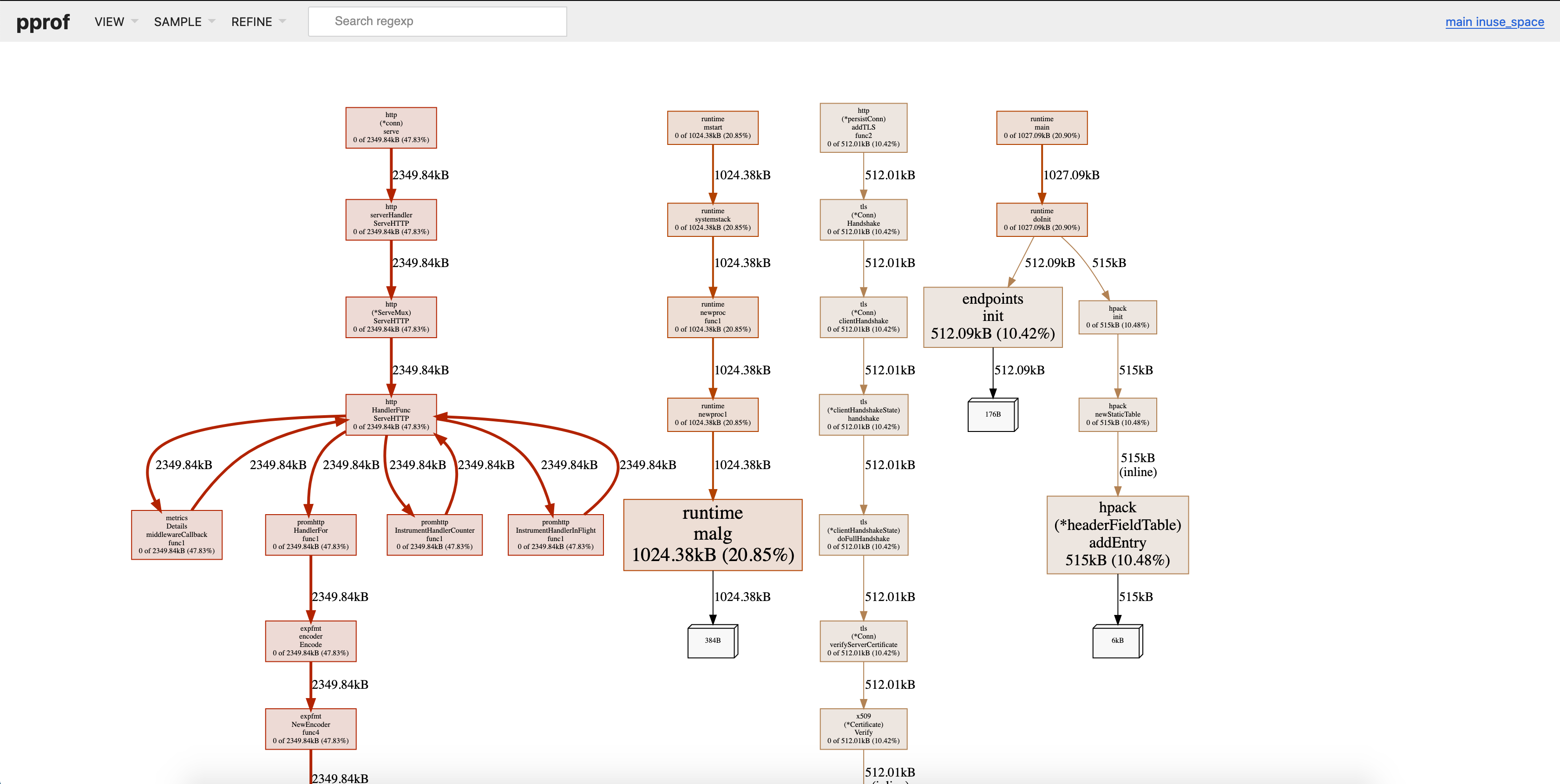 After collecting a 30 second profile before and after a service got traffic, I compared the profiles. Immediately, runtime.malg that grew in memory caught my eye. 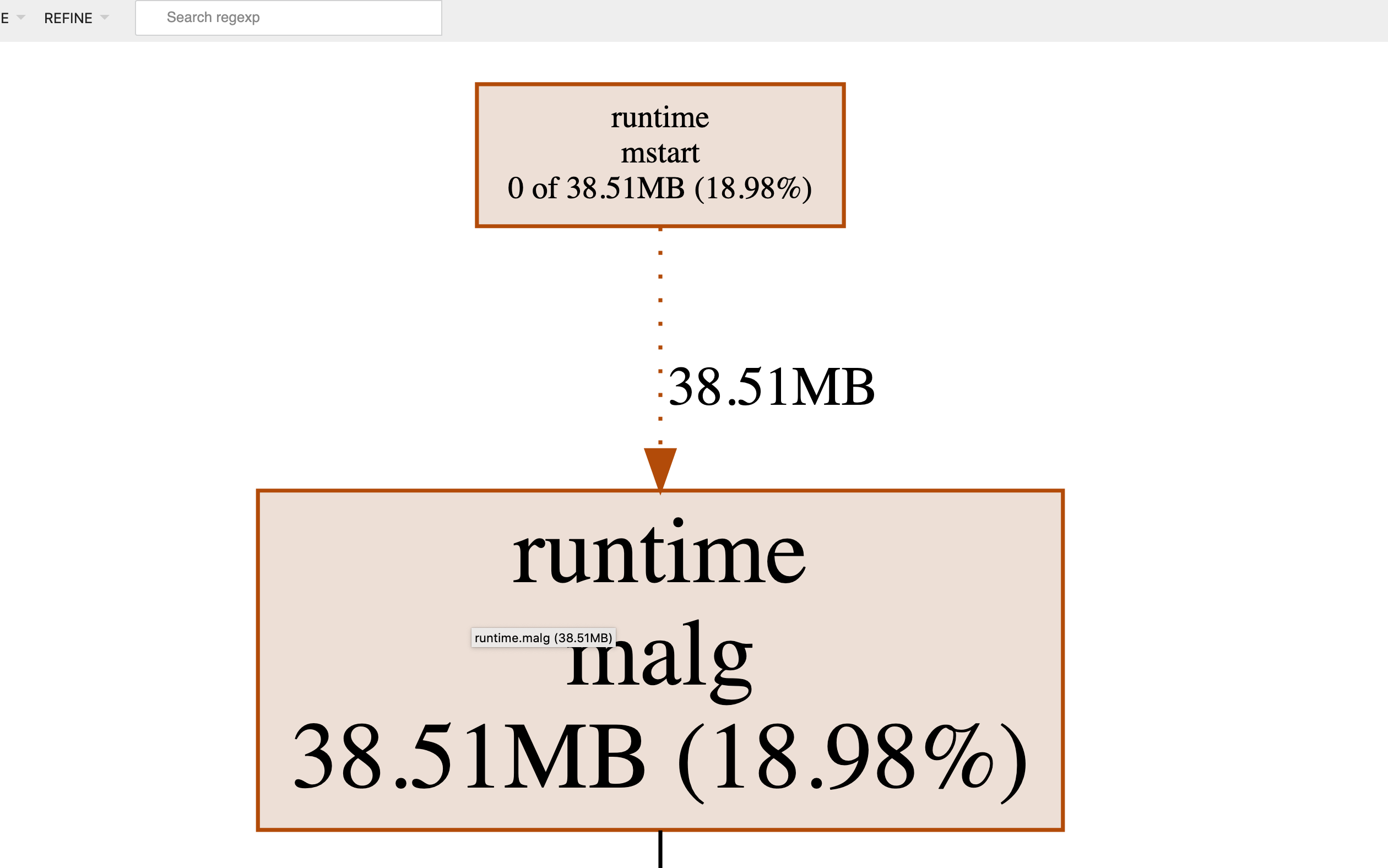 At idle runtime.malg was around 1MB and it grew to 38MB.
When creating a new goroutine the runtime.malg function is called. It allocates a stack trace for the newly created goroutine and holds a reference to it until the goroutine finishes execution.

By now, pprof pointed me towards runtime.malg, that held all goroutine descriptors, which did not get garbage collected.
A goroutine that is never garbage collected means it never finishes execution, which happens on two occasions

To confirm my suspicions, I took a goroutine profile, which looked like this 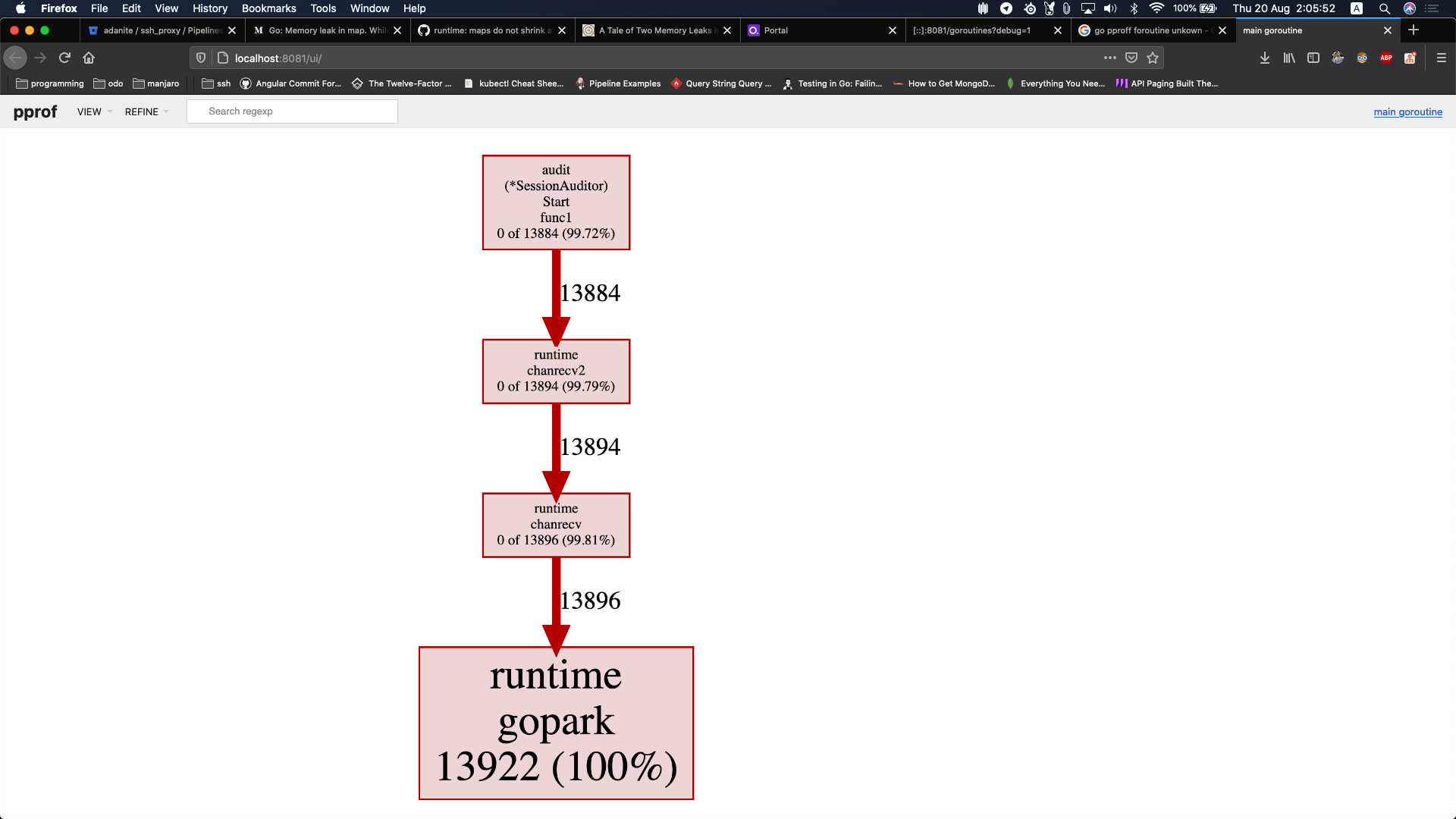 The profile above shows that I have a lot of goroutines spawned that are doing nothing , because they are waiting on a channel.

The goroutine has a for loop which always listens on a channel from time.Ticker. Checking how the stopping of the time.Ticker occurs looks like this

Looking at the documentation of time.Ticker, I noticed this

Stop turns off a ticker. After Stop, no more ticks will be sent. Stop does not close the channel, to prevent a concurrent goroutine reading from the channel from seeing an erroneous “tick”.

It immediately struck me, the channel is never getting closed, which leaves the goroutine in a waiting state forever, which leads to the runtime.malg to accumulate gouroutine descriptors, which increases the heap until we reach OOM exception.

I added a done channel to the goroutine and made sure to close it on ticker.Stop()

The memory leak above turned out to be a forgotten channel that caused a goroutine leak. A goroutine leak happens when goroutines never finish execution, which leads to their stack stay on the heap and never get garbage collected, which eventually leads to an out of memory exception.
The cause of memory leaks will almost always be from your applications side, but as I crunched through several of them, I noticed it is easier to start with the small things, like, checking the runtime Github page for new issues, or, if the leak started after a new release, comparing it to a previous release without the leak. These small things can save you tens if not hundreds of profiling hours. Regardless of where you choose to start, pprof can come to your aid. Pprof is Golang’s profiling tool which allows you to take cpu, heap, OS thread and goroutines profiles and compare them visually.